Does your brand have a sound, and is it listened to?

Does your brand have a sound, and is it listened to?

In Denmark there’s a saying “Small pots also have ears”. It’s something parents remind eachother when they don’t want their kids to hear what they are talking about. What most people don’t know, is that the sense of hearing is the fastest sense we have – even faster than what we see, taste, smell or feel.

If you are a bit of a nerd, you might now think that it does not fit, for the speed of light is 299,792,458 meters per second and the speed of sound is only 340.29 meters per second. But the crucial thing is the time it takes to get from the eye or ear to your brain. When a sound wave hits your ear, your brain can recognize it in just 0.05 seconds. It’s ten times faster than a blink of an eye!

Bring more senses into play in your imagework

Sound is the first thing we pick up, and therefore also smart to connect to the marketing mix. In addition to being our fastest sense of hearing, it is also ‘hard to close’. Our ability to hear resides in the reptilian brain, which activates our limbic system, which stands for emotions and memories and then follows the activation of the Neo Cortex, which controls the more rational, resonates and creates perceptions. By targeting more of the branding and image work towards sound, you bring, so to speak, your brand completely into the brain stem – quickly. Let’s take a look at how sonic branding has been used by companies to enhance the brand experience.

What is sonic branding?

Sonic branding involves connecting a brand with an original sound effect, song or jingle.
Sound is increasingly used as a marker for brands. Sonic branding is not as well known as visual branding, but at least as important. We only have two senses to play on in the digital world – sight and hearing.

In our digital context, sound has become easier to integrate. If you look historically at how companies have branded themselves, it is clear that sound plays a key role. Although sonic branding is not as well known as visual branding, it is just as important for companies and brands. Some will say it is increasingly important.

The sound of Coca-Cola has been carefully developed over time, and many are familiar with the iconic sound of a Coca-Cola opening and hissing/fizzing. Most people can sing along to ’Taste the feeling’ – this is due to years of intensive work to constantly be at the forefront of the development of digital and social media.

Amazon has been praised for their work with voice-controlled Alexa – especially their collaboration with Samuel L Jackson, whose iconic voice now sounds in millions of homes.
Amazon’s focus on sound in connection with Alexa is, in my opinion, a dazzling example of how technology, culture and image work via PR goes up into a higher entity. Amazon attracted the big TV shows and news portals with the news that everyone can get Samuel L Jackson home in the living room via Alexa.

Mastercard is also at the forefront of sonic branding, and here the effort is also in sound driven by technology and digitization. Market analysis shows that voice-based shopping will grow significantly in the coming years – in the US and the UK alone, a boom is expected from $ 2 billion a year in 2018 to at least $ 40 billion annually in 2022. And in that context, it makes incredibly good sense that we know the sound of our credit card..

The sound of everyday life can also be valuable

These days, two students from DMJX, Ellen Gregersen and Morten Kristiansen, are reaping the fruits of first place in a creative competition at DMJX and a year and a half of excitement. And it’s all about sound and about connecting sound to image work. Good old DSBs have been using sonic branding for years. We all know the sound of DSB and know almost where we are and what to do when we hear the sound here.

At first, Coca-Cola Denmark actually refused to realize the idea, but regretted it. They could not let go of the students idea of ​​coupling the bus breaking sound to their iconic sound of a Coca-Cola opening. Both Ellen and Morten and Coca-Coca Denmark were ‘victims’ of the brand’s many years of sound work and that is precisely why Ellen and Morten’s Coca-Cola bus is driving around Copenhagen these weeks. 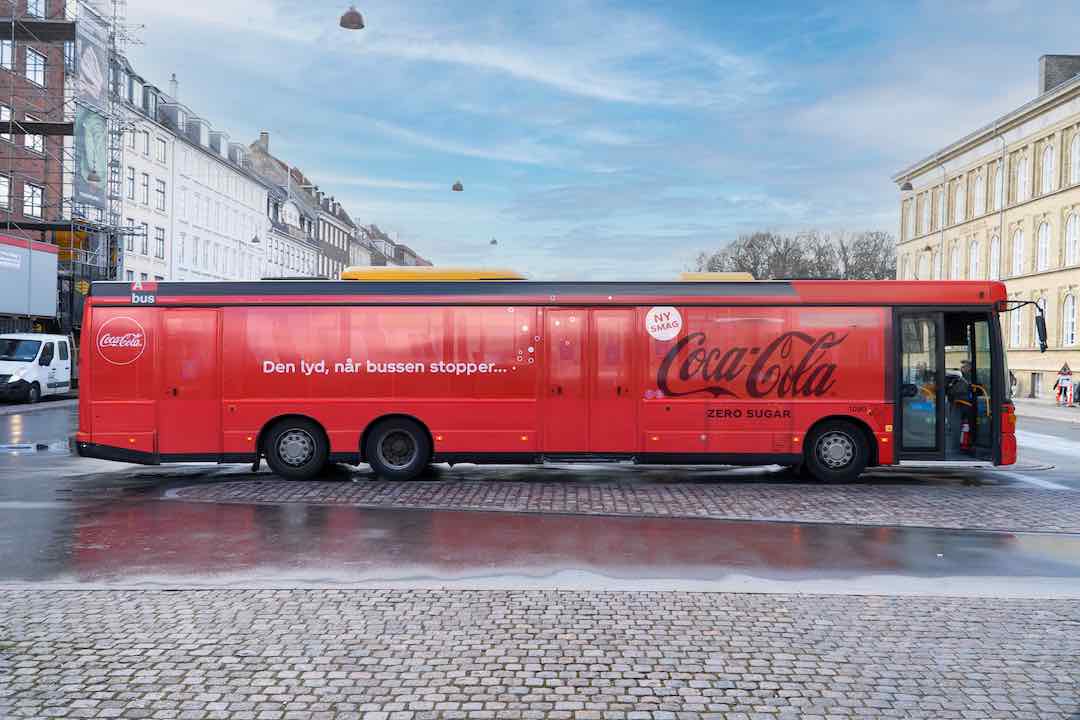 How is the sound of your brand. Does your image have a sound? And do you remember to activate more senses in your communication work? Get started – sound works and makes us want to brand – quite on par with the reptile brain’s desire for crunchy chips after a walk in the city – or maybe relevant in these times – after an evening at home with WAY too much red wine ☺

Boost your insigt with the Essentials now!

Sign up for our newsletter The Essentials and get more insights, guides, trends and experiences in PR, content marketing and storytelling. We provide in-depth interviews with frontrunners in the industry, and make you even smarter and give you a front pocket in the communications market.